A Finnish GIS web-learning platform PaikkaOppi has been developed already over 10 years. It was initially developed to serve the needs to learn GIS in high schools. Now its use has spread also to other educational levels. With PaikkaOppi the school pupils can learn how to use spatial information in different school subjects. Now it has been freshened and is using a new platform. 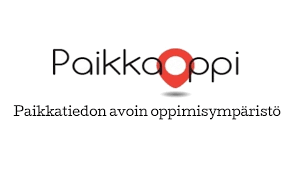 The new PaikkaOppi uses now an embedded map published from the Finnish national geoportal called Paikkatietoikkuna. The embedded map has been integrated to the user management of the educational boards in Finnish municipalities.

The service has been tailored to accommodate the needs of teachers and pupils: the teachers can create own assignments to kids and also share those with their colleagues.

The main goal was to have a service that would be easy to use. Our national curriculum also gave boundaries what PaikkaOppi could be: it can now be used in different learning environments, different subjects and age-groups, states Virpi Hirvensalo, the project manager of PaikkaOppi.

*Oskari was chosen as the development platform, because PaikkaOppi wanted to be built on top of open source. Open platform makes it possible to create new services for schools and for all those who are interested in GIS. It rises the interest and effectiveness of the service," she continues.

Most of the map options come from Paikkatietoikkuna

The tasks can vary a lot. They can be quite simple, like measuring the distance from school to home via road or "as the crow flies". The students can also be assigned to gather information about their environment (digital herabarium or their favorite spots near school). They can also discover elements from their environment and learn to read maps from selected background map layers.

The new platform has been tested with school kids with different client devices.

*You can say that in most parts the pupils have managed to use the new service well and have found the new functionalities fairly easy. Of course there is still some little tweaking to do. The use of PaikkaOppi can be done in different devices because it has been created with responsive style. This means that the pupils can use the service in class rooms and also in the field and trips", explains Hirvensalo.

The service is free to use and stays that way in the future.

Coordinator: National Land Survey of Finland - 2020 | Fork me on GitHub | Oskari on Twitter